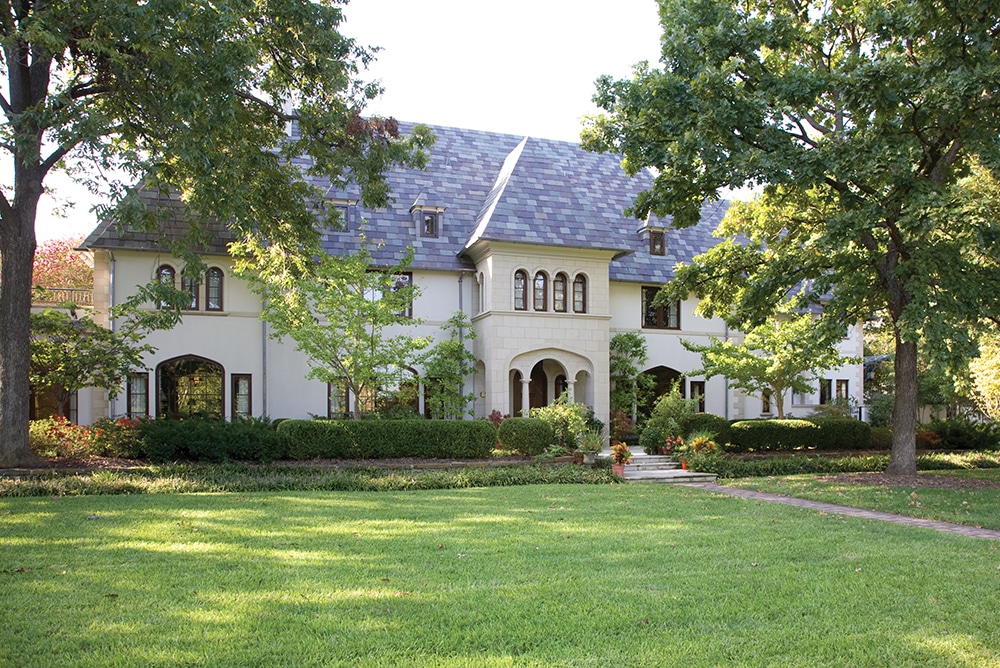 This Norman French style project entailed an addition and restoration of the original Abrams house, dating from the 1920’s. The existing Norman French home in East Dallas was two story; about 7000 square feet; and vaguely French in style. The rear had an unpleasant 1950’s “Frenchie” style that included a Dining room that was more mausoleum, and a blindingly poorly designed kitchen. These were removed. The front entry also had been modified in an unfortunate manner.

The site is more of an Estate than a lot, 5 acres in Wilshire Heights in the “M Streets” area of East Dallas.

The goal of the design of the Norman French building, and the interior, was one of making it feel like the house had been evolving over the centuries. Rectangular, regular rooms were appropriate and okay for the formal spaces, such as the Living, Library and Dining; but the less formal or private spaces were to be of interesting forms and volumes. The client wanted hidden spaces and surprises. The existing house had relatively small spaces, with low ceilings that were appropriate to their size. These spaces were restored, and new spaces added on in the back. These new added spaces were larger in footprint, and required taller ceilings. Because of this the interior was developed with a number of floor level differences that are accessed by stairs in the core of the building.

A new Main Stair was added. It is in a French style that is earlier than the front elevation style. This grand stair has a groin vault above, an iron chandelier, and two large stained glass windows. On top of this Main Stair Tower, is a roof deck with an impressive 360 degree view, including a view of Downtown Dallas. The house had an existing basement, which was retained for mechanical equipment, and an expansion of the basement is used for games, pool tables, and storage.

The Master Suite is on the Second Level, in the original part of the house. It has access to a sun porch above the solarium. The secondary Bedrooms are both in the new and original parts of the home, and all have access to exterior balconies. Many materials were reused from the existing house, along with other found items, such as carved stone capitals and moldings, longleaf pine floors, cypress beams, old brick, flower shop cooler doors for the refrigerator in the Kitchen, and re-porcelained sinks and tubs throughout.

Like the interior design of this Norman French home? You may learn more about it on our Interior Design project for this home.

IT ALL STARTS WITH A SKETCH…